Stray is an adventure game set in a world where you play as a cat in a dangerous cyberpunk world. It is developed by BlueTwelve Studio and published by Annapurna Interactive. 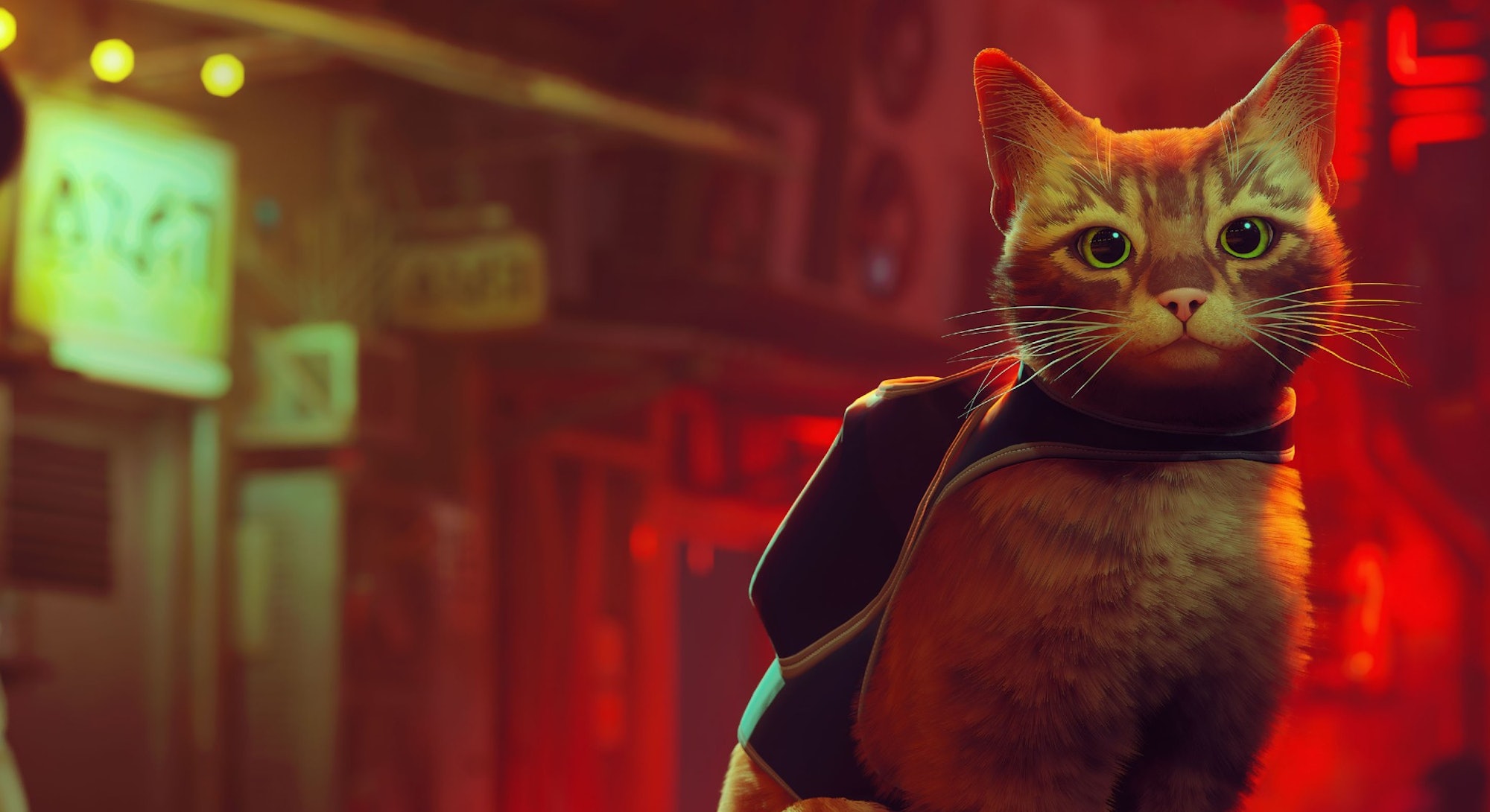 Since its first announcement in 2020, it has been highly anticipated by gamers and cat lovers worldwide. The main appeal of this game is its unique concept and the gorgeous world that it has been set in. But since its announcement potential fans have been worried about the actual gameplay aspects – how fun will this game be in terms of gameplay? Is there enough to sink your teeth into?

If you’re wondering about this, then you’ve come to the right place!

BlueTwelve put together a beautiful debut with Stray. In short, it’s a relaxing game filled with scattered puzzles, beautiful worldbuilding, and compelling storyline. If you’re a thrill-seeking, hardcore gamer looking for a SoulsBorne level challenge, this one may not scratch your gamer itch.

This article will give you a full review of the game, giving you the good, the bad, and giving an estimation of whether or not it’s worth the price. We’re going to try and avoid spoilers for the story, so this will mostly be about the gameplay and how well designed of a game it is.

Stray is the debut game for BlueTwelve Studio, that fits most obviously into the puzzle-platformer genre. You can get it on PlayStation 4, 5, and PC, and was released at full price for around $30.00. You can find it on Steam and hopefully, you’ll find a deal running.

The story follows a stray cat that explores a world dominated by machines and robots. The main aim of this game is to get out of the walled city, solving puzzles and platforming sections. The main selling point of this game is the worldbuilding and immersion – there aren’t many games that let you play as a cat, especially one this endearing.

The game is in third person and you control a cat who is able to traverse the complex level design with an array of different movement abilities. There isn’t any direct combat in this game, and much of the gameplay revolves around solving puzzles and avoiding obstacles.

Play time depends on your abilities and pace as a gamer, but the average play time for this game is around 5 hours. There are no multiplayer features in this game, so it’s purely a single-player campaign for you to enjoy on your own.

The Good & Bad Aspects of Stray

From here on out, we’re going to give you a breakdown of the pros and cons of this game. We’ve broken this down into two sections, and we’ll explain some of the main features of the game as we go.

First off, we want to say that this game has some incredible world design. The Cyberpunk city that the main quest takes you through is gorgeous, both graphically and in design.

Each part of the city that you traverse through feels hand-crafted, with Artificial Intelligent lifeforms as citizens beaming with quirky character. The theme of the city that this game takes place in rides a delicate balance between darkness and whimsy.

The lack of humans in the city and the abundance of technology hints at something terrible that has happened in the past, but the light-hearted nature of many of the AI and other animals you come across will have you feeling cozy and happy.

Had they gone with too much of one or other tone, the game might have lost some of its depth or charm, so we’re glad they got it right.

It’s hard to deny that the central concept of this game fills you with joy. Let’s be clear here – playing as a cat isn’t for everyone – but if it’s the kind of thing that sounds intriguing or cute to you, you’re going to love it. BlueTwelve has made the most of this concept, and even though you’re playing as a cat, the main player character has a lot of personality and you find yourself rooting for them as the game progresses.

It’s also extremely unique. Whilst playing as a small animal in a much larger and scarier world isn’t new within the world of Indie Platformers, it still works very well and you’re unlikely to be disappointed.

The puzzles in this game are the main challenge for a player, and we’re glad to say that BlueTwelve has done a good job at making them interactive and balanced in terms of difficulty.

These puzzles are mostly light, but there are a few challenging ones. If you’ve ever played an old-school point-and-click adventure game, you’ll feel right at home. Now whilst this gameplay loop isn’t for everyone, it’s important to note that BlueTwelve has done justice to the genre in this respect.

We said we’d avoid specific story or level spoilers in this article, so we’re not going to go deep into the main campaign – but we’d like to say that what there is in terms of story is well told and fairly cathartic. Like the worldbuilding, BlueTwelve has done a good job at setting a precise tone that is reflective without being depressing.

The characters are all great, and the story pace moves along well enough that you’ll feel fulfilled once the game is over.

We get it – side quests can be dull. In many games, these are placed so that the player will have something else to do, and to artificially extend the average play-time of the game.

Thankfully, Stray sidesteps a lot of these issues by only adding in side quests that add to the gameplay.

You might be solving an additional puzzle to open a safe, or collecting sheet music so that a musician robot can play them back to you. These feel completely optional and are a great way to add to the game. They’ve mostly made them enjoyable because they feel unobtrusive and aren’t overloaded to the point where they get boring. If side quests aren’t for you, then you can skip them entirely. If they are, then you’re going to like what the game has to offer.

It’s not that the movement in this game is bad, it’s just that it’s limited compared to what you might be expecting.

For the most part, controlling the cat as it moves around the city works well enough, but if you’re expecting a completely dynamic movement system you will be disappointed. There’s no dedicated jump button, and you can climb the ideas of the building and do most of your general platforming by pressing the ‘X’ button when prompted.

So when it comes to the platforming in this game, expect pre-determined paths that you have to figure out, rather than a dynamic environment in which you can decide yourself. It works well enough (especially considering the length of the game) but there isn’t much depth to this system so this could lead to more experienced gamers wanting.

It needs to be said that this is not a long game. At around 5 hours of average playtime, it’s an experience you can get through in one or two sittings. In some ways, this is both a positive and a negative to the overall experience.

The playtime allows the game mechanics to never wear thin enough to get boring and adds to the overall atmosphere and experience of the game. The main problem is that if you buy the game right now for full price, you might find the experience a little lacking.

That said, this game has quite a lot of collectibles, and the gameplay is good enough to warrant repeat playthroughs. If you really like the game you may well be able to get upwards of ten hours out of it – but it’s not a game for you if you’re looking for an expansive, time-consuming experience.

Is It Worth Playing?

Overall, if you’re looking for a succinct, relaxing experience then this game is going to be perfect for you.

We recommend it mostly for players who are looking for a focused gameplay experience set in a gorgeous world that you can get totally immersed in. The main strengths of this game are its puzzles, worldbuilding, general concept, and storyline. If these are things that you value in a game then you won’t be disappointed. On the other hand, if you’re looking for more complex gameplay systems and difficulty, this isn’t going to be the right game for you, and you should wait until it’s lower in price before you check it out.

To conclude, we think that Stray is a great Debut by a small studio. We’re excited to see what BlueTwelve will come up with in the future, and hope to see more games within the exciting cyberpunk future they’ve created.

We hope that this review has given you a good overview of the game and that you now have an idea of whether or not it’s the right purchase for you! Happy gaming!